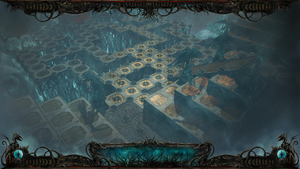 Nameless Tomb is a Deathtrap level.

Long before the First Swarm broke out of the black, pulsating heart of the Ink, the otherworld had been home to god-like creatures who waged wars among themselves for fun and erected grandiose monuments to herald their own greatness. This particular stronghold was built among the ruins of a colossal tomb dedicated to one of those inhuman generals of the lost age. According to the scholars of the Crawling Monastery, it should be a burial place, although no one has ever ventured deep enough to see if there was a crypt in the darkness. And judging by the macabre silence that fills these vaults, maybe it's better this way.

Build a lot of Enhancer Beacons in the same area: since these traps will boost the damage dealt by you traps, you should place as many as possible close to each other.

Watch out: only Flying creatures will attack you on this map, and they will avoid the usual land routes to your Gate. Hook Grinders and Artillery Sentries will help you to deal with them.

Beware! This map has no average trap slots at all! You can only build Artillery Sentry traps, although the number of available Artillery Sentries is quite big. Tip: try to gather as much Essence as you can.