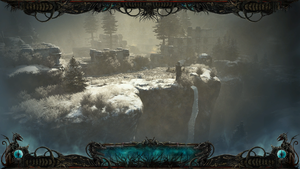 Pale Keep is a Deathtrap level.

This place feels haunted, but at least it gives me some sense of protection. It's comforting to see walls for a change, even if there isn�t much left of them. I shouldn't be surprised. According to my notes, this place used to be a colossal fort built of the marble bones of some long-forgotten species of the Ink. And being one of the first Strongholds, constructed right before the first cycle, the constant swarms have already reduced it to rubble. Still, I'm fairly confident that it can withstand another tide of monstrosities if I can just use its defenses to my advantage.

Make good use of the Whirlblade Columns located on this map, as they all deal massive damage to the monsters.

Beware! This map has no Mystic Tower slots. Also, waves of monsters will vary between Horde and Armored creatures, so you might have to plan or rethink your trap building accordingly.

This map has various clusters for Summoning trap slots. Try to build different kinds of traps there instead of piling up traps of the same type in one place.